A group of mutual aid between consumers and producers, Beaufortain, FR, 6.4.2020 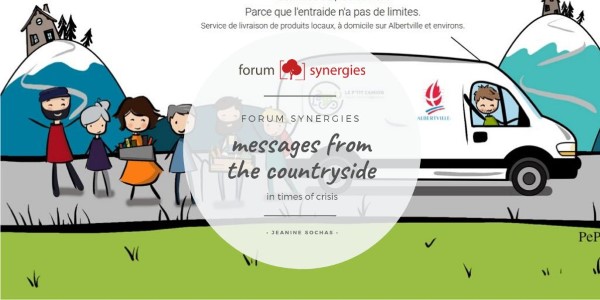 A group of mutual aid between consumers and producers, Beaufortain, FR

Here in Beaufortain and in general in France, we are living a similar situation as in Spain and respect the containment measures. Police checks are relatively frequent and the inhabitants, as best they can, are getting used to it. We are allowed to go out, 1 hour per day and 1 km around our home with a signed travel form indicating the reason. The most difficult part is for top-level sportsmen and women because they can no longer go out in the mountains (any outing in the mountains, even on trails, is forbidden). As for the peasants of Beaufortain, they work as usual, spring is coming and the herds will soon go out.

It is more difficult for the local food networks farmers such as veg producers, farmers selling dairy products, eggs, meat ... Not only did the collective catering stop overnight (restaurants, school canteens, etc.) but also did the open markets. Only 2 farmers’ shops remain open in Albertville as well as organic shops such as Bio Coop or Satoriz, who also buy from local farmers. Since a week, a few prefectoral dispensations have allowed the reopening of Beaufort and Ugine local markets [1] . Are these derogations going to be extended to other villages?

In Albertville and the surrounding villages (administrative territory of Arlysère), a group of people have set up a a group of mutual aid between consumers and producers from the AMAP network which also links with the network of aid to migrants and to the homeless. And they also initiated – with the support of the local municipality - Le Petit Camion initiative - which offers inhabitants the opportunity to buy local food on-line which is delivered to their homes twice a week. A collaborative map has also been created to indicate where to buy local food.

At the same time, we are trying to restart the AMAP (CSA) [2]- which is suspended during winter as our market gardener doesn’t supply vegetables and to allow small producers to sell their products (goat cheese, bread, eggs...). Our vegetable farmer will only deliver from the beginning of May and those who might prefer their usual shops might choose not come to Beaufort. It is not easy.

In Beaufortain, in normal times, our AMAP faces the difficulty of finding producers (vegetable and fruit producers ) who are willing to come to Beaufort to deliver their baskets. Not enough contracts means it is not profitable for them, I can understand. A small handful of people are still believing in it and I think the AMAP is going to work again this year.